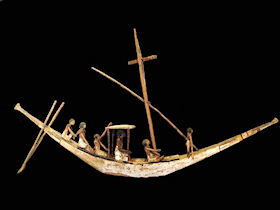 The Egyptian Collection is housed in the Grenfell Room, named after Field Marshall the Lord Grenfell, President of the Society in 1918. As Sirdar (Commander in Chief) of the Egyptian army, and based at Aswan in the late l880s, Grenfell conducted some excavations among the private tombs there. He was a friend of Wallis Budge, then Keeper of Egyptian Antiquities at the British Museum, who copied some of the inscriptions in what are still called the Grenfell Tombs at Aswan. He corresponded with Amelia Edwards, the founder and prime benefactor of the British Egypt Exploration Fund, later to become the Egypt Exploration Society, and became a supporter and defender of her protege, the Father of Egyptology, Sir Flinders Petrie.

Some of the pieces in the BNSS collection were given to the Society by members who knew of Grenfell’s interest in Egypt. Some of the most significant items were acquired from the sale of his personal collection, including a m

odel bakery scene and a model funerary boat from the Aswan tombs. It is thought that several of the pieces were excavated by Petrie and many appear to have been mounted in the style favoured by Budge for the British Museum. Much of the remaining part of the collection came to Bournemouth as part of a very generous donation from the Blackmore Museum in Salisbury. This includes a 25th Dynasty mummy in her painted wooden coffin and a selection of funerary items such as Ptah-Sokar-Osiris figures, stelae and ushabtis.

The BNSS collection of ushabti figures numbers around thirty, ranging in style from the early New Kingdom ‘peg’ form to the classic brilliant blue glazed examples of the Third Intermediate Period. Stone, pottery and alabaster objects from predynastic times to the Middle Kingdom include simple slate palettes, canopic jars and miniature offering vessels. Smaller objects include an assortment of amulets, scarabs and bronze figures, the latter being mainly of Late Period or Roman date.

The BNSS has a copy of the Rosetta stone in the Egyptology Room. You can find out more about the Rosetta Stone here

The Heritage Lottery Fund and Canford Environmental are helping us restore our Lantern roof. Click here to learn more. 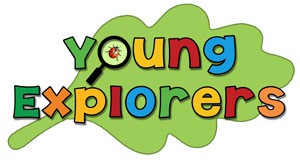